Columbia is not in New York City

When I left Paris, beyond the joy I felt for the great memories I took with me, I also recognized that I had gained a set of tools I can now use to solve problems in the future.

The “Columbia experience” is often touted as one that makes us students engage with global issues in a context where diverse backgrounds and perspectives are the norm. Anyone who has ever discussed any issue with someone from a different background, can recognize the value that exists in diversity. We expand our knowledge and we challenge our prejudices to sometimes give them up for the better. There is however a caveat to this idea that we exist in a perfect “melting-pot” of cultures, and this caveat is called New York City. Whether you are from down the road in Manhattan, or from all the way across the ocean, context is everything when discussing the arts, politics, economics, engineering and any other discipline you can imagine. We are bound by the local history of the place we live in, as well as by the issues that surround Morningside Heights, the East Coast and the United States. What might seem as the most pressing problem of our time in New York, might be absolutely unknown to someone else in another country. This is why removing oneself from the city to explore issues in different contexts is so important. In my case, the Columbia experience does not reside in New York, but rather in the opportunities that we have to travel the world to learn from the discussions we might have with an activist in China, a wine-grower in Uruguay, an urban-planner in Rio de Janeiro, or an American photographer in Paris.

During the spring of 2018, I had the opportunity to experience this first-hand through the Columbia in Paris program. While living with a very charming family tucked away in a tiny apartment in the sixth arrondissement of Paris, I was able to discuss issues that were close enough to those relevant in the U.S., but also sufficiently foreign in the way that they were approached, that I can say that my thoughts on religion, racism, the role of the state and economics, amongst others, certainly changed. While sometimes I found myself in profound disagreement with the ideas expressed by my French peers, I recognized that the context I was in made their comments reasonable. This led me to dig deeper into the disagreement, to learn that the same issue is never resolved in the same way twice. When I left Paris, beyond the joy I felt for the great memories I took with me, I also recognized that I had gained a set of tools I can now use to solve problems in the future. With the mental model I gained of the Parisian mindset, I can now try to imagine how seemingly impossible to resolve puzzles can be easily dealt with if approach from a foreign, yet familiar, context.

We all have the opportunity to live the global experience offered by Columbia, so unless being challenged is not of your interest, do yourself a favour and travel, learn and come back with a renewed mindset from which you’ll be able to achieve greater and more fulfilling accomplishments. 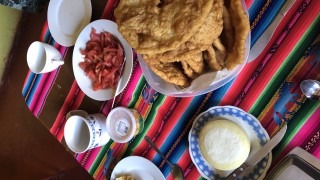 "I was searching for ways to connect what I was studying in classrooms on campus with lived experiences and intersecting identities at the global scale."