If you want to make studying abroad a thought-provoking experience, I encourage you to keep track of every little culture shock as well!

Thanks to the generous offerings of Berlin Consortium for German Studies (BCGS) and Freie Universität, I got to take college courses alongside native German students after a one-month intensive language course. Encouraged by the program to explore the electives at Freie Universität, I even took a course called “Theaterspiel International”, which gave me my first taste of improv comedy (in German!).
But my experience extended so much beyond the academics. With the help of my kind BCGS directors, I found an internship with a PR firm in Potsdam, where I fully mobilized my English, German and Chinese language skills to help put together business presentations. My fond memories of Berlin also include gaping at the how German soccer fans threw toilet paper all over the stadium as a sports tradition at a Hertha BSC soccer game, which was followed by playing foosball against random strangers at a bar. Studying abroad at a crucial time when the European refugee crisis first began (first half of 2015) also meant that I got to witness first-hand the clashes between pro- and anti-refugee forces in Berlin, like at the Beats Against Racism concert on Oranienplatz.
From time to time, I found myself discovering my deeper connections with the city. In the house of my amiable host family, I saw a painting inspired by the work of a Shanghai-based novelist that my mother personally knows. When Margit Siebner, a holocaust survivor invited by BCGS to share her story with us, showed us a postcard from her Jewish father when he took refuge in Shanghai in the 1940s, I was thrilled to tell her that the address on the postcard was not far from my high school, and I had been to the same synagogue that her father visited 70 years ago.
“You only study abroad once.” Looking back, I’m glad I bore that motto in mind throughout my semester abroad. I kept a journal of my random daily observations, like how German bars are infused with smog because indoor smoking is not banned – after a little research, I realized that this has to do with the Germans’ unpleasant memory of a Nazi-imposed smoke ban in the 1930s. If you want to make studying abroad a thought-provoking experience, I encourage you to keep track of every little culture shock as well! 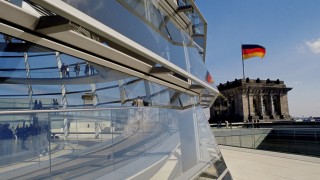 Now, in hindsight, I see that the BCGS program’s impact went far beyond improving my German language ability; the program concretely shaped my career trajectory in ways that I had not anticipated at the time.